Hey friends and fam! We're back on campus at work from the winter break!

Since ministry gets to be pretty slow over the winter break, the staff typically takes a short retreat to rest and reflect on ministry and our values and vision. I was so thrilled to get to go for the first time this year, although it was a bummer that not all of the staff went due to COVID. For those of us who did go, we took extra precautions the two weeks leading up to the retreat to ensure we didn't bring the illness and spread it to those at the retreat.
A good amount of our time was spent just hanging out with the other staff members. It was great to get quality time with the other ministers that I don't get to see or talk to often. It was also a great opportunity to grow closer with the pastors on the UTD team and connect with them in a more personal way than we would over the busyness of the semester.
Another big part of the retreat was discussing the book Money and Power by Jacques Ellul. While the book was mostly over my head and, honestly, kind of a frustrating read, the discussions with the other staff helped me to digest the book and Ellul's arguments much better than I could do on my own. It's also been one of the most stimulating books I've read since starting the apprenticeship in August; it got me thinking critically about the Bible's view on money, how pervasive money's power is in society, and how to think about and use money in a Christian way.
Finally, we spent a couple mornings reflecting on the story of FOCUS. Each minister shared how they got involved in FOCUS (or helped form FOCUS for the senior members) and how God has worked so powerfully in this organization in the lives of college students. Some common themes appeared that I think have profound insight on how to minister to those around us, no matter what stage of life or situation we find ourselves in. Everyone on staff has found it so impactful that those in the ministry were hospitable and welcoming, relational, and invited others into their lives on a personal level. 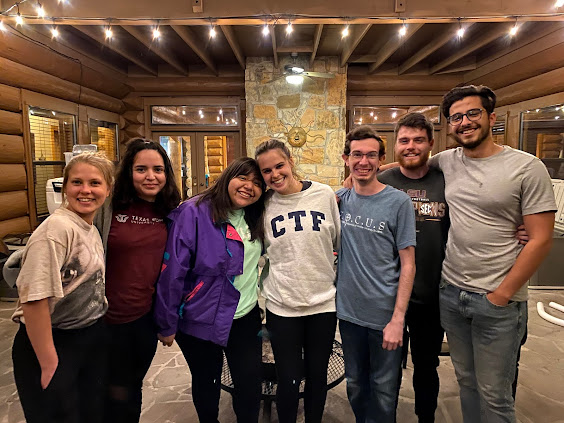 Here we all are one night at the retreat! Love these people so much :) 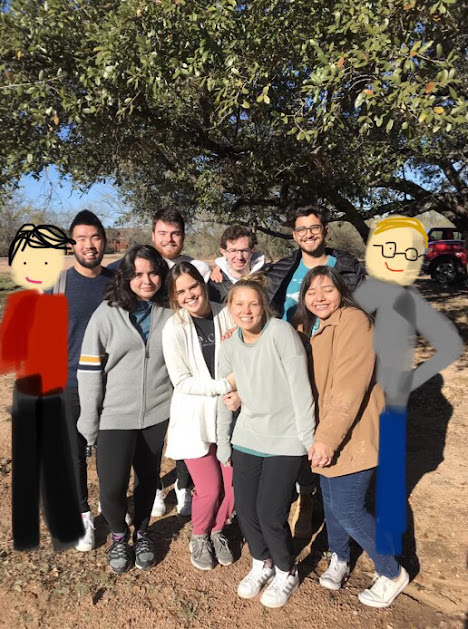 Here's another picture of us as we were leaving to come back home. We decided to take our picture directly facing the sun. I'm literally the most squinty person on the face of the planet. Also, Andrea drew in William and Clint since they're taking all the classes with us, but aren't on staff with FOCUS and weren't invited to the retreat. They're just as much a part of the crew! 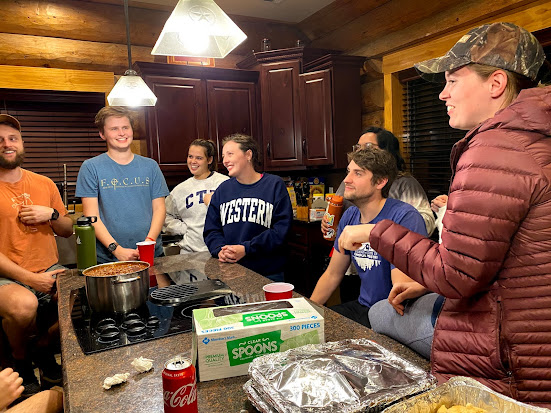 Here's a group of us just hanging in the kitchen one night. The retreat also helped me to see how unique this group of people is. We're all coworkers, but we treat each other like we're members of a real family. Such a blessing. 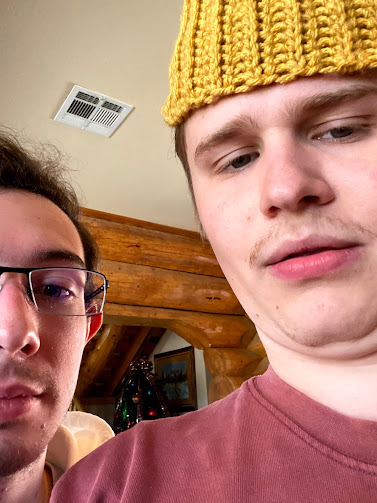 This is Rhett. He's on staff with UTD, so I get to spend a lot of time with him. He's the one of the goofiest and funniest people I've ever met, and I'm so thankful that I have the opportunity to work with him this school year. He helps me to come out my shell and has been teaching me how to not take myself so seriously. Shout out to Rhett. 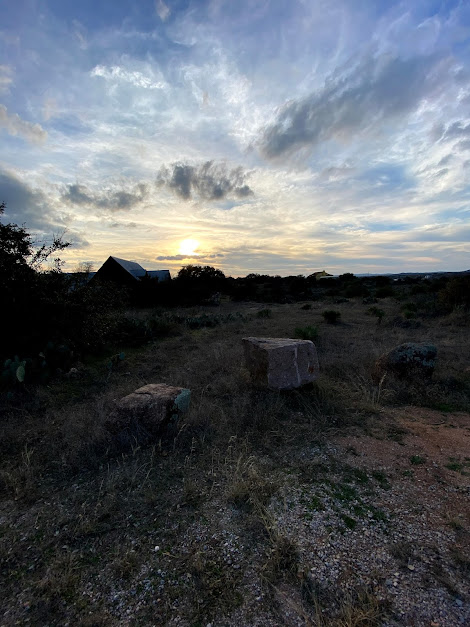 Alright, last picture from the retreat. I got this beautiful sunset one evening and couldn't help but praise God for his beautiful creation. God is a pretty great artist if you ask me. Leonardo da Vinci who?

Once the students got back to campus, we got back to work spending time with them on- and off-campus and meeting new transfers and spring semester freshmen. We were on-campus twice a week for the first two weeks to meet as many students as we could. While it was pretty tough to meet new students since we're restricted to doing outdoor events in the middle of winter, we did manage to meet a few new students and get them plugged into the community. However, it's been even harder this semester to reach students than last semester. With COVID cases at a record high, many students choose to stay in their dorm rooms or chose not to return to campus at all this semester. Please be praying that God would give us creative ways to reach and impact unreached students at UTD this semester for His glory. 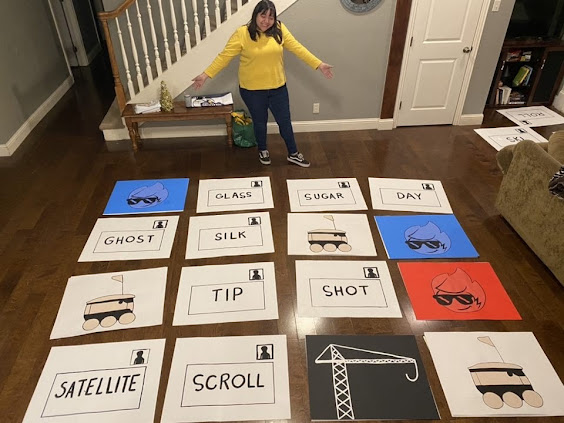 Andrea and Lindsey (the other UTD apprentices) made a giant set of Codenames with a UTD twist. We've been using it on campus, and it's definitely caught the attention of a lot of students.

This is around the time of the apprenticeship when we get an idea of what each apprentice will be doing after the apprenticeship. As much as I would like to stay with FOCUS, I believe God is wanting me elsewhere. After many interactions with students and thinking about where my own ministry aspirations lie, I have decided to attend graduate school starting in the fall semester to pursue a master's degree in counseling, preferably Christian counseling. So many people struggle so deeply with mental illness and other emotional struggles that I can't address full-time as a minister with FOCUS. FOCUS has taught me so much about the heart of God and has been a dear part of my life these last two years. I'm excited to finish up this year with them and see where God takes me next!
In Christ,
Jacob

Popular posts from this blog 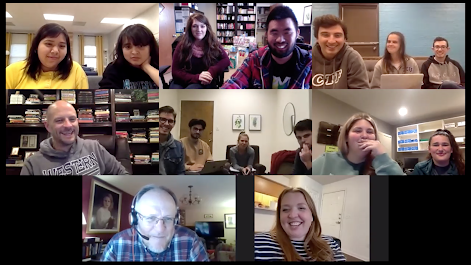 Hi friends and family!  Thanks for taking the time to read my blog update for the month.  I've got some cool stuff to fill y'all in on with more pictures this time! As always, I sincerely thank God for all my donors' support, whether financial or spiritual.  It's such a great opportunity to reach the college campus for Christ. Core At first, it was hard for me and James to get our core guys to where they feel comfortable around each other, but God has been hard at work with that this month!  Our guys have been talking and joking with each other like they've known each other for years.  Forming relationships with the guys in your core is definitely what I enjoyed most when I was in a core my first semester in FOCUS and last year when I first led a core.  It's such a great feeling to start forming strong relationships with these guys that you spend a day every week with. Our core was also featured on our Instagram page recently! Check it out! View this
Read more

Holidays in the Park! 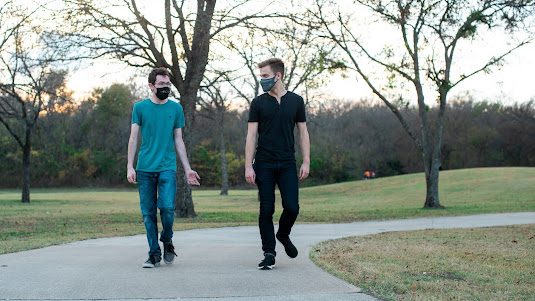 Hi friends and family!  Thanks for taking the time to read my blog post for the month!  Ministry has truly been a sweet blessing, and it wouldn't be possible without your generosity.   Holidays in the Park     November was really dominated by our first large event of the year, Holidays in the Park.  In a normal year, we would have multiple large events throughout the year, but because of COVID, we have to scale down on them pretty heavily and change how they're run and structured.  Since we didn't get to do an event for Halloween, Thanksgiving, and Christmas, we decided to put them all together for a whole day of holiday fun and fellowship.  We started off the day at a park in Richardson playing Halloween-themed games and even had a mask decorating contest.  Throughout our time at the park, we had spiritual activities interspersed between park games like cornhole and ultimate frisbee.  A favorite activity (at least for me) was the walk-and-talk where you pair up with someon
Read more